Russian police detained gay rights activists, as they tried to hold a demonstration Sunday in downtown Moscow while members of a hostile crowd punched the activists and pelted them with eggs. 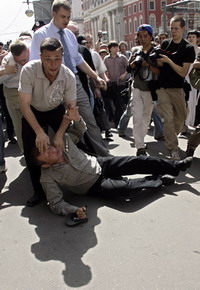 The demonstrators, appearing to number less than 100, tried to present a letter signed by some 40 European lawmakers to the office of Moscow's mayor, appealing the city's ban on a march they wanted to conduct.

But police quickly grabbed about a dozen demonstrators and forced them into a bus, including Russian gay rights movement leader Nikolai Alexeyev. Police then hustled away others, including German parliament member Volker Beck, as gay rights opponents threw eggs and shouted: "Moscow is not Sodom."

Marco Cappato, a European Parliament deputy from Italy, was kicked by one as he spoke to journalists; Cappato began shouting: "Where are the police? Why don't you protect us?" and officers hauled him away as he struggled with them.

Cappato later told Italy's Sky TG24 that he had been released. He said that when he saw that Ottavio Marzocchi, an official with the Liberal Democrats in the European parliament, had come under attack, he began shouting and "within five seconds I was taken away by police in anti-riot gear."

A total of 31 people were detained and most of them later released, Moscow police spokesman Yevgeny Gildeyev said. Two Italians were detained for jaywalking, and a German man was taken away from the area by police to prevent him from being beaten, Gildeyev said.

But Beck, who was later released, told The Associated Press that police had beat him and the others and took their passports away as they moved in on the group in what he said authorities called a "security measure."

In a telephone interview, Beck said he would appeal to the German government to pressure Russia for the release of three Russians who he said were to remain in detention until at least Monday. The German Foreign Ministry had no immediate comment on Beck's request.

Alexeyev said he and two other activists expected to be held until Monday, Ekho Moskvy radio reported.

Beck also denied the group had been holding a demonstration, insisting they were only trying to hand over the letter.

Cappato denied he had broken a traffic rule. "I was just trying to defend a friend from violent people because the police were not doing that," he said.

Some Italian lawmakers also called for an official complaint to Moscow. There was no immediate reaction from the Italian Foreign Ministry.

The banned march was aimed at marking the 14th anniversary of Russia decriminalizing homosexuality. Despite being taken out of the criminal code, homosexuality is still widely despised.

The action came amid tension between Russia and the West over a number of issues including civil rights. European Union leaders criticized President Vladimir Putin at a summit this month over Russia's treatment of demonstrators and government opponents, and Putin has accused the West of meddling in his country's affairs and seeking to dictate its behavior.

One woman in the headscarf typical of devout Orthodox believers repeatedly threw water from a bottle at Peter Tatchell, a British human rights activist, as he tried to speak. A young man in a camouflage T-shirt then punched Tatchell in the head and Tatchell was led away by police.

Gildeyev said a man was detained after attacking a Briton, presumably referring to Tatchell. The Interfax news agency quoted a Moscow city spokesman, Mikhail Solomentsev, as praising the "cooordinated and polite actions the police, who acted in the strict accordance with the law."

But none of the gay rights opponents were seen being taken away by police, and demonstrators who weren't detained complained that police ignored the violence.

"We were peacefully trying to present a letter. That is never a reason to arrest people," said Sophie IntVeld, a Dutch member of the European Parliament.

The only Russian lawmaker to publicly state support for the demonstrators came from an unexpected wing: Alexei Mitrofanov of the ultranationalist Liberal Democratic Party.

"How can one act in such a manner, assuming Russia wants to be a part of Europe," Mitrofanov said at the scene, according to the Interfax news agency.