Mstislav Rostropovich, the ebullient master cellist who fought for the rights of Soviet-era dissidents and later triumphantly played Bach suites below the crumbling Berlin Wall, has died, his spokeswoman said. He was 80. 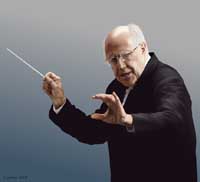 Rostropovich, who lived in self-imposed exile in Paris, suffered from intestinal cancer. He was hospitalized in Paris in early February, and after he took a turn for the worst, his family arranged for him to be flown back to Russia, longtime manager Ronald Wilford said.

He was treated at a Moscow hospital, and was visited on Feb. 6 by Russian President Vladimir Putin.

Seven weeks later, he was well enough to attend a celebration at the Kremlin on his 80th birthday, but appeared frail. The ITAR-Tass news agency reported Friday that he had been hospitalized again several days ago.

Spokeswoman Natalia Dollezhal told The Associated Press that Rostropovich had died, but would not immediately provide details.