President Vladimir Putin told Russians more clearly than ever that he will step down when his second term ends next spring, but left his potential choice of a preferred successor unclear. 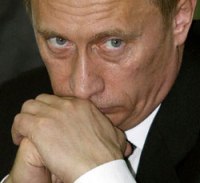 Characteristically sanguine about Russia's future and combative toward the West in a state-of-the-nation speech, Putin also threatened to suspend participation in an important European arms treaty and charged that foreign forces are out to undermine the country's resurgence.

Speaking a day after the burial of Boris Yeltsin, who handed him Russia's reins seven years ago, Putin rejected claims that he has beat a retreat from democracy and stifled freedoms that flourished under his predecessor.

The Constitution adopted under Yeltsin bars presidents from serving three straight terms. But Putin's popularity and Russia's lean experience with democratic power transfers has led to persistent speculation that he might stay on.

Last month, the speaker of the upper parliament house became the latest in a string of politicians to call for constitutional changes allowing Putin to run in the presidential election next March.

Putin has dismissed the idea but has left occasional confusing hints. In the nationally televised address to parliament, he seemed to clarify the issue with a few words: "The next state-of-the-nation address will be given by another head of state."

For some lawmakers, those words were the most important in the 75-minute speech.

Observers have seen the push for a third Putin term as being driven by Kremlin forces intent on retaining power past 2008.

But Putin said nothing to reverse previous hints that he wants to keep a hand in Russia's rule from behind the scenes. He has also suggested he will name a preferred successor who would ensure continuity.

But he refused to tip his hand in the speech: "It is premature for me to declare a political will."

Public discussion of a potential Kremlin favorite for the March 2008 vote has focused on two Putin proteges who have received lavish coverage in the state-run media Sergei Ivanov and Dmitry Medvedev.

Putin's mix of clarity and coyness is part of the style that has emerged in the annual state-of-the-union speech to parliament delivered on his turf in the Kremlin, televised live nationwide and rebroadcast throughout the day as well as other public statements.

Also typical of Putin was a tirade directed at the West. As in previous speeches, he painted a picture of a resurgent Russia struggling nobly to thrive in the face of external forces seeking to subvert the still-vulnerable country.

"There are those who, skillfully using pseudo-democratic rhetoric, would like to return to the recent past some to loot the country's national riches, to rob the people and the state; others to strip us of economic and political independence," Putin said. "There is a growth in the flow of money from abroad for direct interference in our internal affairs."

With tensions high between Moscow and Washington over U.S. plans to deploy missile defense elements in former Warsaw pact states, Putin also said Russia should suspend the Conventional Forces in Europe Treaty until the United States and other alliance members ratify it.

"Our partners are behaving incorrectly, to say the least," he said.

Putin did not cite specific countries as sources of funding he characterized as interference, but was clearly referring in part to the United States. The Foreign Ministry and lawmakers this month complained loudly about U.S. funding of democracy promotion organizations in Russia, accusing Washington of meddling in crucial upcoming elections.

Officials also claim such funding aims to provoke opposition protests such as those that have helped propel pro-Western leaders to power in neighboring Georgia and Ukraine.

Despite Putin's grip on the loyal parliament, tension is rising ahead of December parliamentary elections and the March presidential vote. Police have harshly cracked down on a series of opposition protests in Moscow and elsewhere this year, beating dozens of demonstrators and detaining hundreds.

Opposition forces say Putin has been systematically strangling democracy through a series of measures to centralize power and shut opponents out of politics. He rejected those allegations by adamantly defending one of the measures, a change in electoral law that scrapped direct elections of individual parliamentary candidates.

Putin asserted it would promote pluralism and "help the opposition widen its representation."

Yeltsin's death delayed Putin's speech by a day he was buried Wednesday and drew renewed attention to complaints that Putin is rolling back the democratic progress of his predecessor's rule.

In the speech, Putin suggested that Yeltsin laid the foundation for Russia's revival at a difficult time, and clearly aimed to portray himself as the curator of his legacy. He began by calling for deputies to stand in silence in memory of Yeltsin, and later called for a national library to be established in his name.

Putin also celebrated Russia's oil-fueled economic recovery. But he called for more of the country's revenues to be applied to improving the lives of its citizens, many of whom have been left behind in the boom.

"It is inadmissible for a country with such reserves accumulated from its oil and gas revenues to be at peace with the fact that millions of its citizens live in slums," he said.