President Vladimir Putin on Thursday made his clearest rejection yet of speculation that he would try to seek a third term, but gave no hint in his state of the nation address as to whom he sees as his preferred successor. 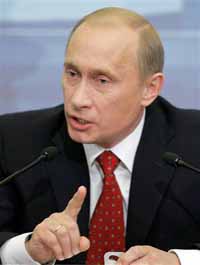 Putin's second, and constitutionally mandated last, term in office ends in 2008 and many observers have suggested he would try to amend the constitution to stay in office; last month, the head of the upper house of parliament proposed making such a change. But Putin has consistently dismissed the idea, and his statement in the speech underlined the point clearly.

"The next state of the nation address will be given by another head of state," he said.

He then acknowledged that many had expected this speech would be his opportunity to openly state which person he wanted to follow him, but instead he drew a laugh by saying "it is premature for me to declare a political will."

Russia enters a high-stakes political season this year with parliamentary elections in December, followed by presidential elections in March. Russian officials in recent months have complained that Western countries are trying to meddle in the political process by funding pro-democracy organizations, and Putin echoed those allegations.

"There is a growth in the flow of money from abroad for direct interference in our internal affairs," Putin said in his address, delivered to the Federation Council, the upper house of parliament.

"There are those who, skillfully using pseudo-democratic rhetoric, would like to return to the recent past - some to loot the country's national riches, to rob the people and the state; others to strip us of economic and political independence," Putin said.

Putin did not cite specific countries as sources of the funding. The Russian Foreign Ministry this month complained extensively about U.S. funding of democracy-promoting organizations in Russia.

Officials contend that such funding aims to provoke mass opposition protests such as those that helped propel pro-Western leaders into power in neighboring Georgia and Ukraine in recent years.

Police harshly cracked down on a series of opposition protest marches this year, beating some demonstrators and detaining hundreds.

Opposition forces charge Putin is strangling democracy through an array of measures to centralize power and increase the influence of large political parties such as his allied United Russia party, which dominates the Russian parliament.

This year's parliamentary elections will see seats distributed entirely on a party-list basis, eliminating the opportunity for small parties to win seats through strong local support in particular district - a change that critics say is among the measures to smother opposition.

But Putin, in his speech, said it was part of "a revolutionary step modernizing the elections system ... (it will) help the opposition widen its representation."

The death Monday of Putin's predecessor, Boris Yeltsin, drew new attention to complaints that Putin is heading the country away from democracy. Yeltsin, as Russia's first post-Soviet leader, worked changes that encouraged pluralism and nudged the country toward democracy.

But Putin in his speech clearly aimed to portray himself as the curator of Yeltsin's legacy. He began the speech by calling for deputies to stand in silence in memory of Yeltsin and later called for a national library to be established in his name.