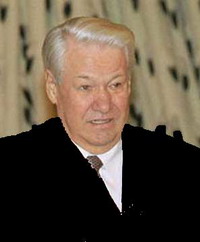 Two former U.S. leaders and President Vladimir Putin were there on the funeral of the first post-Soviet Russian leader Boris Yeltsin. There was a solemn farewell Wednesday conducted by some two dozen white-robed priests and with a crowd of dignitaries.

The elaborate Cathedral of Christ the Savior echoed with priests' chanting and the a capella choir singing the funeral liturgy during the 85-minute ceremony. It was a quiet finale for one of the most dramatic and controversial figures of modern political history.

Yeltsin was a key engineer of the end of the Soviet Union and led the country into often-chaotic attempts to become pluralistic and to thrive after decades of Communist repression and economic deterioration. Yeltsin was widely admired for his valor in opposing the 1991 hard-line coup attempt and for his joie de vivre. But he was widely derided for his heavy drinking and was despised for allowing the sell-off of lucrative prizes of Russia's industrial empire to insiders while millions of his countrymen plunged into poverty.

"The whole dramatic history of the 20th century was reflected in Boris Nikolayevich," a letter from Russian Orthodox Patriarch Alexy II said, using Yeltsin's patronymic. "Being a strong individual, he took upon himself the fate of the country at a difficult and dangerous time of radical change."

The letter was read at the funeral by Metropolitan Yuvenaly, who led the service. The church said Alexy was unable to attend because he was undergoing medical treatment.

Before the funeral, more than 20,000 people had filed through the gold-domed cathedral to the view the body of Yeltsin who died Monday at age 76. After the viewing, dignitaries including former U.S. Presidents Bill Clinton and George H.W. Bush arrived and offered condolences to Yeltsin's black-clad widow Naina.

The last Soviet leader, Mikhail Gorbachev, also attended. Gorbachev's reform attempts set in motion a wave of open dissatisfaction with the Soviet system. Yeltsin, once a Gorbachev ally, became an adversary as the Soviet Union disintegrated.

Many of the mourners said they admired Yeltsin for breaking the grip of monolithic Communism and moving the country to pluralism - and said they fear his successor, Vladimir Putin, is reversing the progress.

"I came here to pay respect to Boris Nikolayevich for everything he has given us: freedom and the opportunity to realize ourselves," said 73-year-old Svetlana Zamishlayeva. But now, she said, "there is a certain retreat from freedom of the press, from fair elections, from all kinds of freedom."

"The policy course that he set is being dismantled today," said Nikita Belykh, leader of the liberal Union of Right Forces party, which has become increasingly marginalized during Putin's seven years in office.

He suggested that when Yeltsin resigned and turned over the presidency to Putin on New Year's Eve 1999, the departing leader may have expected Putin to continue his policies . "We all make mistakes," Belykh said outside the cathedral.

Communist lawmakers, meanwhile, expressed resentment of Yeltsin's role in bringing an end to the Soviet Union. They refused to stand for a moment of silence called in Yeltsin's memory at the opening of the Wednesday session of the lower house of parliament, news agencies reported.

"We will never give honor to the destroyer of fatherland," Communist deputy Viktor Ilyukhin was quoted as saying by the RIA-Novosti news agency.

After the service, a black Mercedes hearse carried Yeltsin's coffin from the cathedral. It was borne toward Moscow's prestigious Novodevichy Cemetery on a caisson pulled by an armored reconnaissance vehicle painted military green.

Guards goose-stepped alongside the coffin as it slowly moved along a tree-lined street strewn with red carnations. Priests and family members walked behind, followed by the dignitaries who attended the funeral.

The solemn procession brought together Russia's leading politicians, artists and intellectuals, many of them political foes and almost all of them veterans of a more chaotic, desperate and - to some - freer era.

Novodevichy Cemetery holds the graves of an array of Russia's artistic elite, including those of Dmitry Shostakovich, Sergei Prokofiev and Anton Chekhov.

Many countries sent lower-ranked retired politicians and diplomats to the funeral - a reflection of the funeral's quick timing but also perhaps of Yeltsin's uncertain legacy.

Yeltsin is widely remembered for his bold and principled stand against the 1991 hardline Communist coup attempt against Gorbachev and for launching Russia on the path to political pluralism.

"He gave us a choice - not just a choice between cheese and ham, but the possibility to think for ourselves," said mourner Alla Gerber, the head of Russia's Holocaust Foundation. "He took us out of the claws of that terrible regime."