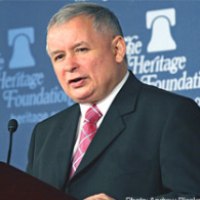 Poland is going to lift its veto on talks on a new EU-Russia partnership agreement, stalled over Moscow's ban on Polish meat and plant products.

Russia has barred meat imports from Poland since late 2005, citing health concerns. The unresolved dispute led Warsaw to veto the negotiations on a deal that aims to forge closer energy ties between Moscow and the 27-nation bloc.

The European Commission said last week it had provided comprehensive replies to questions raised by Russian experts after their recent inspections in Poland. Russian authorities had demanded the EU provide specific information on how the bloc will monitor meat hygiene in 2007.

"Following recent contacts ... the European Commission has indeed received indications from the Polish authorities that Poland is in a position to give its agreement to the launching to the negotiations," EU spokesman Johannes Laitenberger said, adding that European Commission President Jose Manual Barroso, German Chancellor Angela Merkel and Polish officials have discussed the issue.

"The Commission is happy about this very constructive (approach) of Polish authorities," Laitenberger said.

A spokesman for the German Foreign Ministry said Poland withdrew its objections at a meeting of EU ambassadors in Brussels earlier this week.

"It is an important first step toward adopting the mandate for negotiations," spokesman Martin Jaeger said. But Barroso said it was not yet possible to say if or when the negotiations with Russia would start.

EU diplomats said progress has been made in closed-door talks and that Poland was putting pressure on the EU's executive to provide guarantees that Russia's embargo on Polish meat will be lifted.

The standoff will be discussed at an EU foreign ministers meeting in Luxembourg later this month and at a Russia-EU summit in May. EU Health Commissioner Markos Kyprianou will also meet Russia's Agriculture Minister Alexei Gordeyev in mid-April to discuss the situation.

Polish Prime Minister Jaroslaw Kaczynski said Warsaw would not block EU talks on the bloc's negotiating mandate for the discussions on the partnership agreement with Russia, as it did in November. The mandate must be approved by all EU governments.

"We are dealing with far-reaching goodwill, real goodwill, from Poland. We will see what the effects will be."

But Polish Agriculture Minister Andrzej Lepper said Poland would not end the six-month standoff without getting something in return from the Kremlin.

"It cannot be that Poland unilaterally yields and Russia does nothing," Lepper told journalists.