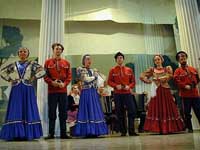 Plays, operas, ballets and films in Russia are routinely punctuated by the trilling of mobile phones and many patrons are unashamed about chatting in defiance of terse warnings to turn phones off at the start of the evening.

"Although the technology is rather expensive, our theatre accepted the costs in order to protect the artists from unpleasant surprises," said Alexander Chepurov of St Petersburg 's Alexandrinsky theatre, which was founded in 1756, informs Independent Online.

He said one actor had been forced to deal with "noises off" the only way he could, declaiming: "Turn off that stupid phone and let me finish my soliloquy!"