Russia's lower house of parliament on Friday approved legislation aimed at easing efforts to secure the extradition of fugitives and others sought by Russian authorities, including wanted Chechen envoy Akhmed Zakayev. 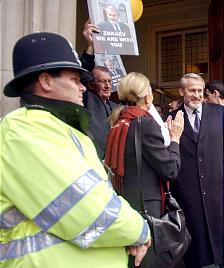 The State Duma voted 377-0 to pass the ratification bill submitted by the Kremlin. It removes legal provisions in several Soviet-era treaties that, according to the ITAR-Tass news agency, did not recognize the jurisdiction of the United Nations' International Court of Justice.

The ratification is aimed at helping Moscow's efforts to get Chechen leaders living abroad and fugitive criminals extradited back to Russia to stand trial.

Duma Speaker Boris Gryzlov was quoted by ITAR-Tass saying that the ratification means Russia would be able to appeal to the U.N. court in its effort to have Zakayev stand trial in Russia.

Zakayev, the representative to late Chechen rebel chief Aslan Maskhadov, was given asylum in London by British authorities in 2003. He is wanted in Russia on murder and kidnapping charges, which he and his supporters maintain are trumped-up.

Responding to a question about Zakayev, Deputy Foreign Minister Grigory Karasin told lawmakers that police and prosecutors would still have to do ample legal work to secure extraditions, though he acknowledged that the ratification means Russia will be better able to use the international court for such purposes, reports AP.

"Undoubtedly, this creates all the necessary preconditions to raise such questions," he said.

In his comments, Karasin also singled out Britain, suggesting that Russian law enforcement could still have plenty of legal arguments to make before London would agree to extraditions.

Russian authorities have also been actively seeking billionaire Kremlin critic Boris Berezovsky, who has also been given asylum in Britain and who is wanted in Russia for a money laundering probe he says is politically motivated.