Russia, Belarus in talks on gas supplies amid threats of halt in deliveries

Talks on Tuesday between Belarusian authorities and the Russian state gas monopoly Gazprom brought no agreement on gas prices, the company's spokesman said, raising the possibility of a suspension of supplies to the ex-Soviet republic in the New Year. 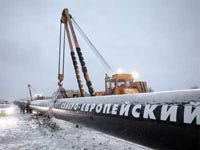 Russia, Belarus in talks on gas supplies amid threats of halt in deliveries

Gazprom wants to raise the price the neighboring country pays and has suggested it could halt deliveries unless an agreement is reached by Jan. 1, when the current contract runs out.

The months-long price dispute has raised the specter of a repeat of the suspension of gas supplies to Ukraine at this time last year and has strained relations between Russia and Belarus, which have the closest ties of any two ex-Soviet republics.

He said there is still time to reach an agreement, but added that the outcome of Tuesday's talks was "quite alarming" suggesting the positions of the two sides are far from agreement.

Gazprom, which had been asking for US$200 per 1,000 cubic meters, has offered to reduce that to US$110, of which Belarus would pay US$80 in cash and the rest by handing over 50 percent of its state-controlled gas transport network, he told The Associated Press.