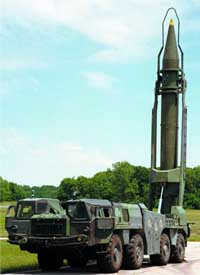 The RS-20V Voevoda, which NATO identifies as the SS-18 Satan, was fired from its silo in the southern Ural Mountains' Orenburg region.

Officials said it hit a target on a testing ground on the Far East Kamchatka Peninsula, more than 6,000 kilometers (3,750 miles) away.

"The launch once again confirmed the technical characteristics of the missile and its readiness to perform combat tasks while its service lifetime has been extended," Defense Ministry's spokesman Igor Kostyshin told The Associated Press.

Russia has conducted regular test launches of Soviet-built ballistic missile to check their readiness. A post-Soviet funding shortage has left the country short of funds to replace its aging arsenals with new missiles.

The missile, capable of hitting 10 individually guided nuclear warheads at targets 11,000 kilometers (more than 6,800 miles) away, is the heaviest weapon in Russia's arsenal. The SS-18 and another multi-warhead missile, the SS-19, have formed the core of Russia's strategic forces since the Soviet era.