The lower house of Russian parliament has rejected a lawmaker's proposal to book Madonna a seat on a Russian flight to the international space station, news agencies reported Wednesday, a day after the singer's controversial concert in Moscow. 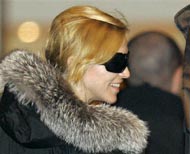 State Duma member Alexei Mitrofanov, referring to Madonna's reported expression of desire to become a "space tourist," proposed that the chamber send a formal inquiry to the Russian space agency about organizing a space trip for Madonna in 2008.

"Because of the television possibilities, it would be a pretty serious event in the year of elections in the United States and Russia," he was quoted as saying by the RIA-Novosti news agency.

The Duma turned down the proposal, agencies reported without specifying the vote tally.

Later, space agency spokesman Igor Panarin was quoted by RIA-Novosti as saying that no seats on Russia's Soyuz spacecraft would be available until 2009.

"Taking into account her good physical preparedness and financial capabilities, the dream of Louise Ciccone of a space flight could be realized in 2009," Panarin was quoted as saying. Like many Russians, he did not use the singer's first name, apparently sensitive to the Russian Orthodox Church's objections to her use of Christian symbols, especially crucifixion, in her shows, reports AP.

So far, three private individuals have paid a reported US$20 million (Ђ16 million) each to be launched on 10-day trips to the ISS. American Anousheh Ansari is to become the fourth and the first female in a Sept. 18 launch.