Vladimir Putin on Monday announced his final decision to send a battalion of Russian engineers and explosives experts to Lebanon. Their main aim is to help repair the damage caused by Israel's campaign to uproot Hezbollah guerrillas. 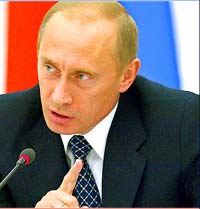 In comments shown on state-run television, Putin instructed aides to prepare the necessary paperwork for Russia's upper house of parliament to authorize the deployment, which will be separate from the U.N. peacekeeping mission.

Defense Minister Sergei Lavrov said an advance team would travel to Lebanon this week and the full group could be in place by month's end.

It was unclear how many members the team would contain but Ivanov said they would include experts at disarming unexploded ordnance, as well as engineers to evaluate the damage inflicted on Lebanese roads and bridges.

He said the team will work outside of the area where United Nations-authorized peacekeepers are operating, the AP reports.

Israel's 34-day war in Lebanon caused wide damage to Lebanon's infrastructure and left unexploded bombs and other weaponry scattered throughout the country.