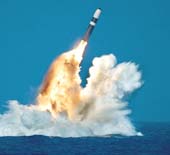 Russia's Strategic Rocket Forces, which are responsible for the country's ballistic missiles, successfully launched the K65M-R missile from a testing ground at Kapustin Yar in the southern Astrakhan region, the ITAR-Tass news agency reported.

The commander of the forces, Col.-Gen. Nikolai Solovtsov, said the main purpose of the launch was to test "a uniform warhead for land- and sea-based ballistic missiles" and newly developed elements of a system designed to penetrate missile defenses, Interfax reported.

Solovtsov said that plans for a U.S. missile-defense system "could upset strategic stability," the agency reported, suggesting that the test was part of an effort to ensure that Russian missiles are capable of foiling any U.S. shield. He said the test involved optic and radar measurement systems that reproduce similar U.S. systems, according to Interfax.

"The planned scale of the United States' deployment of a ... missile defense system is so considerable that the fear that it could have a negative effect on the parameters of Russia's nuclear deterrence potential is quite justified," Interfax quoted him as saying.

President Vladimir Putin has boasted that Russia has missiles capable of penetrating any missile defense system, specifying that they can change their flight path on approach to a target. Solovtsov said the system being tested Saturday would make missiles more difficult to spot and their trajectories more difficult to predict.

Russia opposed Washington's withdrawal in 2002 from the 1972 Anti-Ballistic Missile Treaty in order to deploy a national missile defense, saying the U.S.-Soviet pact was a key element of international security. Putin called the decision a mistake that would hurt global security but not threaten Russia.

The treaty banned missile defense systems on the assumption that the fear of retaliation would prevent either nation from launching a first strike, reports AP.