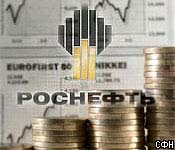 Shares in Rosneft's main subsidiaries closed down an average of 25 to 30 percent on Russian exchanges after Rosneft announced ratios for swapping subsidiaries' stock for shares in the unified company.

Kakha Kiknavelidze, an analyst at the Brunswick investment bank, said Rosneft would have to float its shares at an extremely high price through the initial offering, or IPO, for holders of subsidiaries' shares not to lose money.

"Rosneft would have to be valued at US$90 billion (Ђ74 billion) dollars to justify these valuations," Kiknavelidze said.

Valery Nazarov, the head of the Federal Property Agency, was quoted as saying in November that the company was worth up to US$58 billion (Ђ48 billion).

"I hope that the minority shareholders of Rosneft's subsidiaries won't be offended," Rosneft chief executive officer Sergei Bogdanchikov was quoted as saying by the ITAR-Tass agency after meeting with President Vladimir Putin, "the exchange ratio is fair and was evaluated by Western and Russian experts."

Russian officials have suggested the IPO on Russian and foreign exchanges could raise as much as US$20 billion (Ђ16 billion) making it the biggest ever.

The terms could also give shattered oil giant Yukos nearly 10 percent in the company. Yukos still holds 23 percent of its former production unit Yuganskneftegaz, which Rosneft purchased after a disputed auction in December 2004.

However, it was unclear whether Yukos would still be the owner of the Yuganskneftegaz stake at the time of the consolidation, since a bankruptcy court could decide to liquidate the company in late July. The consolidation is due to be completed in November.