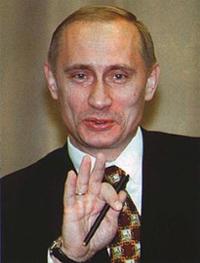 "Unfortunately, we recently received from our American colleagues a list demanding additional agreements that we consider to have been put behind us long ago," Putin said.

Putin said that the requirements "artificially return us (to an earlier stage in) the negotiating process."

He did not specify what areas the U.S. demands covered.

"We are interesting in joining, but will take this step (only) if it satisfies all participants in the process, and primarily Russia and the (Russian) economy," Putin said at a meeting with Russia's top business executives.

Russia has been negotiating to join the 149-member global commerce body since 1994. It has had to embark on a major set of legislative reforms to fall in line with WTO rules, including producing a new customs code.

Under WTO rules, each member has the right to seek its own trade deal with a candidate before approving that candidate's membership. The bilateral deals negotiated by individual members are eventually consolidated so that all members trade with the new member under the same conditions.

Russia has signed agreements with the European Union, China and Japan, but has yet to reach deals with the United States, Colombia and Australia. Russian officials have said Moscow should be ready to accede to the organization by year's end.

Speaking separately, Russia's economics minister expressed hope that despite the new demands, Russia and the U.S. would be able to resolve their differences.

"I hope we will be able to settle all issues," the Interfax news agency quoted German Gref, the Economic Development and Trade Minister, as saying. "We are still optimistic that we will be able to finish the negotiations as soon as possible."

Gref said that a letter setting out "new terms and new differences" had been received several weeks earlier.

A Western diplomat said last month that Russia and the United States were very close to finishing negotiations. But significant issues remained, he noted, including access for foreign financial services firms to Russian markets, specifics on agricultural support and the enforcement of intellectual property rights, reports the AP.