President Alexander Lukashenko, declared the winner by an overwhelming margin in a vote denounced as fraudulent, said Monday that "the revolution that was talked about so much ... has failed." 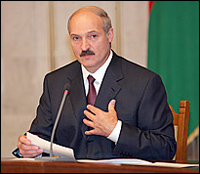 Lukashenko, speaking after election officials said he won a new five-year term with 82.6 percent of Sunday's vote, said Belarusians had resisted "colossal pressure from outside" and "showed who's the boss" in Belarus.

The main opposition candidate, Alexander Milinkevich, called the official vote tally for Lukashenko "monstrously inflated" and denounced him as an "illegal, illegitimate president." He called for a large crowd to turn out for an evening protest on a central Minsk square.

"In Belarus, we did not have an election but an unconstitutional seizure of power," Milinkevich said, speaking shortly before Lukashenko made his comments at a nationally televised news conference.

"We demand repeat elections, in which the law of the country is followed," he said.

"I very much ask all to come out into the square today, in as large numbers as possible," he said. "I believe that Belarusians have awakened, overcome fear and can stand up for their future."

Thousands of opposition supporters protested in Minsk's October Square after polls closed Sunday night, defying a government ban and denouncing the vote and supporting Milinkevich's call for a new election.

"You have seen our opposition, and if you are reasonable people you have been convinced that it's worthless," Lukashenko said. He repeated his allegations that the opposition is backed by Western forces plotting to bring him down, reports the AP.