The head of the observer mission of a grouping of former Soviet states on Monday called the disputed Belarusian presidential election open and transparent. 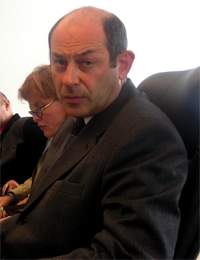 The assessment by Vladimir Rushailo, head of the Commonwealth of Independent States' mission, is likely to contrast sharply with an assessment to be issued later Monday by the Organization for Security and Cooperation in Europe 's mission.

Rushailo, in a droning statement that lasted more than a half-hour, said the CIS mission's 467 observers concluded that, despite some technical violations, the Sunday elections took place within the requirements of Belarusian law.

The OSCE, by contrast, assesses elections in terms of whether they meet international standards for free and fair democratic elections.

The assessments by the OSCE and CIS missions on elections in post-Soviet states frequently differ radically.

Rushailo is a former interior minister of Russia. The Kremlin is closely allied with Belarus' authoritarian President Alexander Lukashenko, whom official results show winning a third term in a landslide.

Opposition supporters held a rally of thousands on Sunday night to protest the results, and have called for another protest on Monday evening.

The CIS observers "declare the elections free, open and transparent," Rushailo said. He later denounced Western countries' persistent criticism of Belarus for intimidating and restricting the opposition ahead of the election.

"Prejudiced statements, harsh announcements, as well warnings from several countries on the eve of the elections about their readiness to take various restrictive measures of a political and economic character against the Republic of Belarus: the CIS observers see these as attempts to influence the course of the election process in its final stage," Rushailo said.

The mission included observers from Azerbaijan, Armenia, Kazakhstan, Kyrgyzstan, Russia, Tajikistan, Turkmenistan and Uzbekistan. Notably absent were observers from Georgia , Ukraine and Moldova , all of which are CIS members that recently have distanced themselves from Moscow to take a more West-leaning course, reports the AP.