Russia wants Iran not to pursue uranium enrichment at home 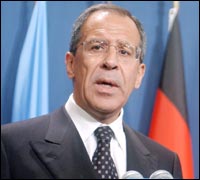 Russia wants Iran not to pursue uranium enrichment at home

"We are convinced that among the other components of efforts (by the world community) should be a moratorium on enriching uranium inside Iran until specialists from the International Atomic Energy Agency have clarified everything," Lavrov told reporters a day after a Russian envoy wound up talks in Iran on the nuclear crisis.

The two countries' nuclear chiefs announced at a Tehran news conference Sunday that they had agreed in principle to a plan to establish a joint uranium enrichment venture on Russian territory. That development could mark a breakthrough in efforts to ease international concerns that Iran could develop nuclear weapons.

Lavrov stressed that the talks between Russia and Iran had not ended and would continue up until the IAEA meeting on Iran next week, reports the AP.