Russian forces have rounded up two rebel suspects in Chechnya and detained another suspected militant in the neighboring province of Dagestan, officials said Wednesday. 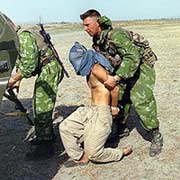 The suspected rebels were detained Tuesday in Chechnya's northern Naursky region during security sweeps, the regional branch of Russia's Interior Ministry said in a statement.

In the Caspian Sea province of Dagestan east of Chechnya, a suspected militant was detained in the village of Michurino near the town of Khasavyurt near the Chechen border, regional police spokeswoman Andzhela Martirosova said Wednesday. The suspect was accused of involvement in Chechen rebel groups, she said.

Russian troops have been battling separatist rebels in Chechnya for more than a decade and the violence has increasingly spilled over into other parts of the troubled Russian Caucasus region, reports AP.