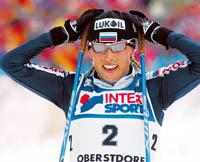 The ski-sprint contest ended today on the Olympic Games in Turin . Three Russian skiers will participate in the next lap, and only one Russian skier wouldn’t help his team-mates.

As a result of previous laps, three skiers will participate in quarterfinal, their names are Vasili Rochev, Ivan Alypov and Sergei Novikov. Another Russian sportsman Pavel Korostylyov wouldn’t run in quarterfinal lap.

It is important to remind, that earlier Russian women successfully participated in the qualified laps, reports Pravda.Ru