The talks between the leaders of Russia and the Democratic People's Republic of Korea, or North Korea, as it is commonly referred to, were held on the campus of the Far Eastern Federal University on Russky Island. At first, Putin and Kim talked in private for about two hours. The North Korean leader said that the exchange of opinions was very informative. Delegation officials joined Putin and Kim later. The summit lasted for about three and a half hours. 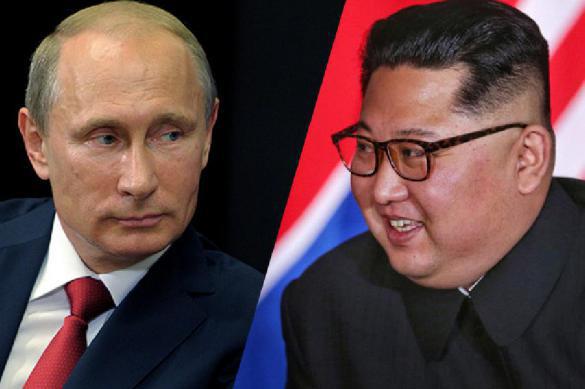 Putin called Kim Jong-un an interesting person to talk to, an open individual, who conducts a free discussion on all issues of the agenda.

Speaking at a reception in honor of the North Korean guest, Putin stressed that there was no alternative to a peaceful solution of the nuclear problem on the Korean Peninsula. At the same time, Russia is ready to continue cooperation to reduce tensions on the peninsula and strengthen security in Northeast Asia on the whole, Putin said.

Kim Jong-un proposed a toast "for the development, strengthening and prosperity of the great Russian Federation and for the good health of President Putin, for happiness and wonderful future of the two countries, for the health of all comrades and friends present here." The DPRK leader also  expressed gratitude for the invitation to come to Russia and for the warm welcome.

"On behalf of the Korean people, I send warm greetings to the Russian people, who selflessly work to build the strong and prosperous Russia," said the DPRK leader, assuring that he would like to continue maintaining friendship between the two countries and promote further development of relations.

After the talks, Kim Jong-un presented Vladimir Putin with a Korean sword, which, as he said, personifies the power and the soul of his own self and the Korean people, who support Putin. Putin thanked Kim for the gift, but noted that in Russia, according to a popular belief, gifting weapons is considered to be not a very good sign. Putin took a coin and handed it to Kim Jong-un to symbolically "buy" the sword from him.

This is Kim Jong-un's first visit to Russia. It is also his first foreign trip since his re-election as chairman of the DPRK State Council. After the summit, the head of North Korea will have a cultural program. He will stay in Vladivostok until the evening of April 26, while Putin will travel to China to participate in One Belt - One Road Forum.