Sunken section of Crimean Bridge retrieved from the sea

The railway section of the Crimean Bridge, which slid into the sea in early October, has been retrieved up to the surface. 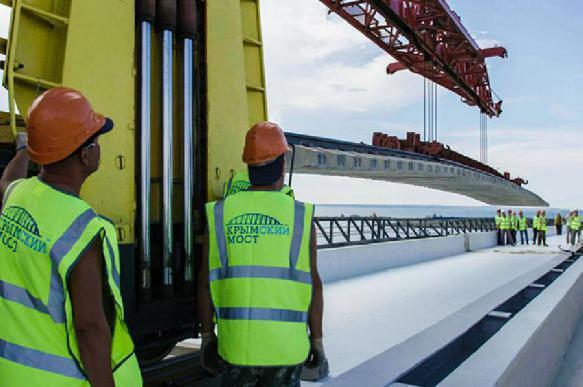 On October 4, it was reported that a railway span of the bridge tilted and slid into the water as it was being lowered onto supports. It is believed that the incident occurred due to a technical malfunction in a jacking system. No one was hurt.

It was also reported that the incident will not affect the construction schedule.

"Builders have retrieved the section of the railway span of the Crimean Bridge from under the water. Last week, the metal element of the span was cut into five parts, lifted by a floating crane and taken to the storage area on the island. We are expecting the new metal construction to arrive," the Crimean Bridge information centre said.