President Vladimir Putin accepts with the proposal from the Japanese Prime Minister to change the approach to negotiations on the peace treaty. The Russian president invited him to conclude the treaty before the end of the year. 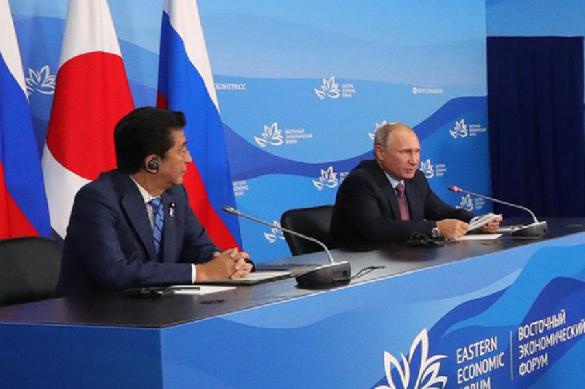 "Such a simple thought has occurred to me right now," Putin said at the plenary session of the Eastern Economic Forum.

Putin reminded that Russia and Japan have been trying to conclude the peace treaty for 70 years already. He referred to the Soviet-Japanese declaration from 1956, which ended the state of war between the two countries. The Parliament of Japan and the Supreme Council of the USSR ratified the declaration that stipulated for the conclusion of the peace treaty within a short period of time.

"So, we have been negotiating for 70 years. Shinzo said: let's change the approach. OK, Let's do it. Let's conclude the peace treaty, well not now, but before the end of the year, without any preconditions. And then, on the basis of the peace treaty, we will continue to resolve all the controversial issues as friends. This would make it easier for us to resolve all problems," Putin said.

Putin's remarks came in response to So Putin reacted to the words of the Japanese prime minister, who once again called for a peace treaty. Japanese Prime Minister Shinzo Abe said that there were  still obstacles to implement the peace treaty. "Mr. President Putin, let us once again confirm our determination, our intentions before numerous witnesses, before our entire audience. If we don't do it now, then when? If we don't do it, then who will do it for us?" the Prime Minister of Japan asked Putin.

Russia and Japan have not been able to conclude the peace treaty because of territorial disputes. Japan claims its rights to the Kuril islands of Kunashir, Shikotan, Iturup and Habomai, referring to the Treatise on Trade and the Borders from 1855. Russia insists that the islands became the territory of the USSR as a result of the Second World War.