Russian President Vladimir Putin and German Chancellor Angela Merkel plan to discuss a variety of topical issues, including sanctions, the state of affairs in Syria and Ukraine, as well as issues of economic cooperation during their meeting in Germany on August 18. 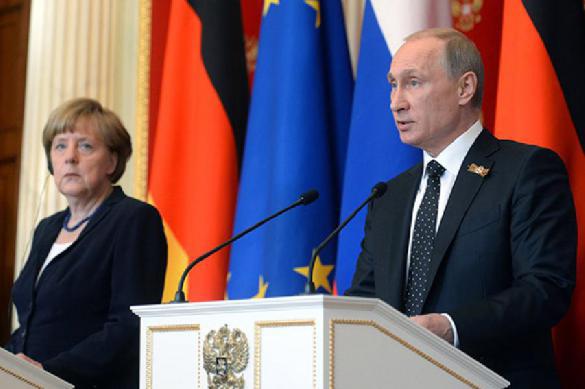 "As for the topics, they are going to compare notes on all most vital issues. These include, of course, the crisis in Ukraine, the crisis in Syria, restrictions that many countries now face and consequences of these restrictions," Putin's official spokesman Dmitry Peskov said.

Putin and Merkel will also discuss possible US sanctions, including those against German companies.

"They will also talk about issues of bilateral trade and economic relations, the implementation of major international commercial projects, such as Nord Stream-2 and other issues that the parties deem necessary to discuss," he added.

Official representative of the German government, Steffen Seibert, said at a briefing in Berlin on August 13 that Chancellor Angela Merkel will hold a meeting with Russian President Vladimir Putin on August 18 at the government residence in Mezeberg Castle. The talks are to start at 18:00 local time.