Writer Zakhar Prilepin, who serves as adviser to the head of the breakaway People's Republic of Donetsk, Alexander Zakharchenko, asked Putin about the possibility for the Ukrainian crisis to aggravate during the World Cup in Russia. 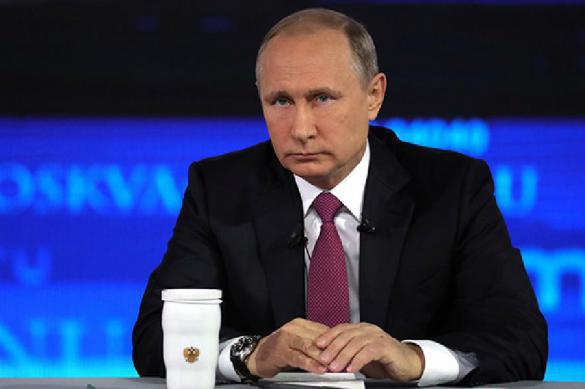 Answering questions during his annual Q&A session, Putin said that Kiev will have to deal with most serious consequences should the crisis in the Donbass aggravate. According to him, the people of the two breakaway republics of Donetsk and Luhansk will not tolerate this. In addition, the Russian president said that an aggravation of the crisis in the Donbass may pose a threat to Ukrainian statehood.

Putin believes that the Ukrainian authorities do not intend to solve the problem, because "they do not need voters from the self-proclaimed republics, who will never vote for those who started the conflict.

There were also a few curious blitz questions to Putin.

"What do you do when you do not know what to do?"

"There is a rule for drivers: if you're uncertain, do not overtake. The price for mistakes for people of my profession is too high. If I don't know what to do, I try to find a solution and come to a firm opinion of what is necessary and expedient."

"Have you ever laughed at yourself?"

"I do it frequently."

"Not that long ago, a German publication wrote that Trump was pushing Europe into Putin's hands," Putin said. "This nonsense is hilarious. If you combine it with an earlier joke about Russia's influence on US elections, it's even more ridiculous because now they say that Trump is throwing Europe into Russia's hands."

"Is there a question that you don't have an answer to?"

"What advice of your father's would you pass to your grandchildren?"

"When did you start believing in God?"

"This is a very intimate question ... In my opinion, every person has faith in God in their souls at birth, but people understand it differently in different times and under different circumstances. During the Great Patriotic War, when even most ardent atheists were going over the top, I am sure that they were thinking about God. There are people who understand this without any extreme situations, but others think about these things when they experience something extreme."

"What did you sacrifice for your presidency?"

"My personal time. It's unavoidable, but the benefit of it is understanding that you are doing a unique and proper job to improve people's well-being and make the most important thing ever stronger - the Motherland.