The Russian economy has entered the phase of sustainable growth, which gives every reason to believe that "we are moving in the right direction," President Vladimir Putin stated at the beginning of his annual Q&A conference with Russian citizens. 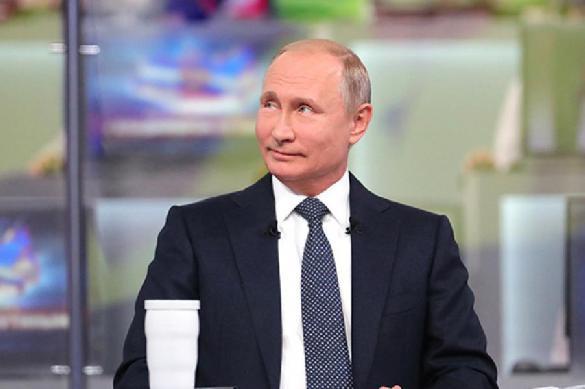 The Russian economy has been growing steadily in 2017 and in early 2018, he added.

"This is modest growth. The growth is insignificant, but this is not a decline," he said adding that the Russian economy demonstrated the growth of 1.5% over the past year.

"The industry is growing, the agriculture is growing steadily, and all this has acquired a stable trend," Putin added.

Putin noted that Russia currently shows an all-time low inflation level, which is "a very important prerequisite for further growth," the president said. The direct investment in the Russian economy rose by 4.4% last year, he added.

The Central Bank of the Russian Federation has been increasing its gold and foreign currency reserves, wheres people's life expectancy has increased too.

In April 2018, the International Monetary Fund retained its forecast for the growth of the world economy at 3.9% per year for the next two years.

Today's Q&A session is Putin's 16th. It is officially called "Direct line with President" when Putin answers people's questions during a live televised broadcast. However, this year, there is no audience present in the studio. There is only the president, two TV presenters and a few volunteers. All the questions, requests and complaints from the people are displayed on interactive screens in the studio in the form of text messages and video calls. Therefore, chances to ask Putin a non-scripted question during the session has been minimized to zero.