Saudi King books all of Ritz-Carlton Moscow, but his escalator breaks

The moving airstairs of the King of Saudi Arabia, Salman bin Abdel-Aziz Al Saud malfunctioned upon the king's arrival at Vnukovo international airport in Moscow on Wednesday, October 4. The monarch brought his personal moving stairs with him to be able to descend from the aircraft safely. However, the stairs stopped moving as the king stepped on them. 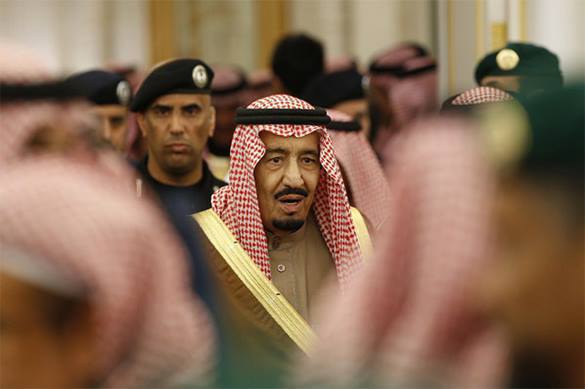 The video of the incident shows King Salman of Saudi Arabia waiting for a few seconds and adjusting his clothes before finally deciding to walk down the stairs with a little help from a man behind him.

Elena Krylova, a spokeswoman for the administration of the Russian President, told RIA Novosti that the broken escalator arrived from Saudi Arabia as well. "We do not have such vehicles at the Russian government terminal," she said.

King Salman is not the first national leader, who has found himself in a confusing situation upon arrival in another country. In September 2016, a similar incident happened to US President Barack Obama. At the airport of Hangzhou in China, the US president was not provided with an airstairs truck at all. Obama had to use the retractable stairs of his airliner to leave the aircraft.

The king of Saudi Arabia usually travels with a large entourage and hundreds of tons of things that he needs not to part with his lifestyle. The Saudi monarch always brings his luxury cars and two escalators that he uses when leaving his aircraft. For example, during his visit to Indonesia in March, King Salman brought 1,500 people with him, including 25 princes, and 450 tons of cargo, in particular two Mercedes-Benz S600 vehicles and two escalators.

This is the first time when King Salman Bin Abdul-Aziz Al Saud pays a visit to Russia. At the airport, he was welcomed by Deputy Prime Minister Dmitry Rogozin, Director General of the Russian Direct Investment Fund (RFPI) Kirill Dmitriev, Special Representative of the Russian President for the Middle East and Africa, Deputy Foreign Minister Mikhail Bogdanov, and Saudi Ambassador to Moscow Abdurrahman Ar-Rassi.