The body of the world's most powerful nuclear icebreaker Sibir, Project 22220, was launched in St. Petersburg, RIA Novosti reports. 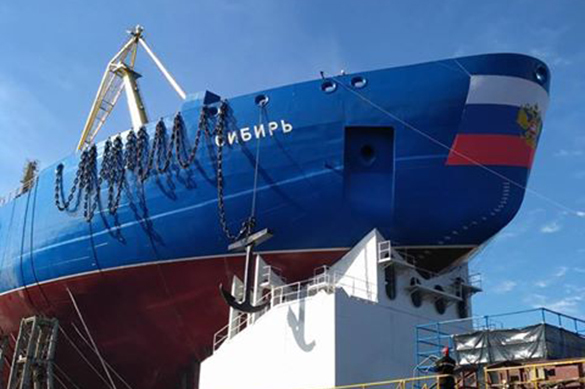 The plenipotentiary of the President in the North-Western Federal District Nikolay Tsukanov, Rosatom CEO Alexei Likhachev and President of the United Shipbuilding Corporation Alexey Rakhmanov attended the solemn ceremony. Chairwoman of Russia's Accounting Chamber Tatyana Golikova, who was also present at the ceremony, smashed a bottle of champagne against the hull of the icebreaker.

In late August of the current year, Afrikantov Design Bureau reported about the readiness of the nuclear power plant for Sibir icebreaker. Two RITM-200 reactors with the capacity of 55 MW each will be installed on the vessel. The fuel in the reactors will need to be reloaded every 7-10 years, and the reactors will last for 40 years.

Sibir icebreaker is a serial ship of Project 22220. The construction of the vessels started in May 2015. After the launch, engineers will work to complete the vessel. The icebreaker is said to be ready for navigation in 2020.

The displacement of the vessel is 33,540 tons, she is 173.3 meters long and 34 meters wide. The icebreaker will carry a crew of 74 people. She will be able to develop a speed of 22 knots in clear water. The icebreaker is designed to break both oceanic and river ice up to 2.9 meters thick. Thus, it combines properties of two classes of vessels - river and sea ships.

The flagship of the project - Arktika icebreaker - which was launched in 2016 - is to be put into operation in June 2019. The third vessel of the project - Ural - was laid down in July 2016 and, according to new plans, will enter service in 2022.