In the USA, pilots are not allowed to watch videos of Su-35 demonstration flights at MAKS-2017 international air show. Allegedly, the videos of the Russian Su-35 aircraft in action may demoralise US pilots. 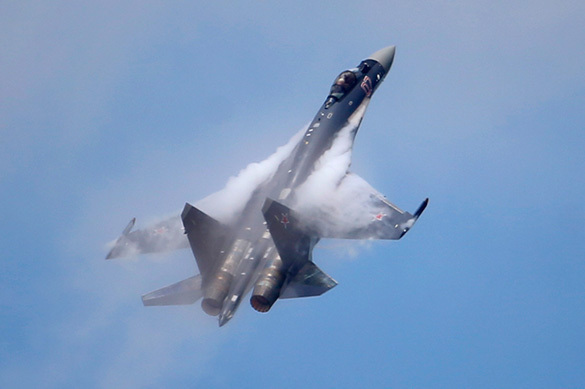 Russia has already received orders for Su-35 fighter jets from China, India, Indonesia, and other countries. The Russian Defence Ministry plans to buy about 90 of such planes. Russia currently takes the lead in the segment of heavy multipurpose fighters, and the launch of the Su-35 will only strengthen her position.

The flight and combat performance of the Su-35 makes this aircraft superior to all existing fourth generation fighters. What is more, the Su-35 is on par with fifth-generation aircraft. This is a state-of-the-art multipurpose fighter that ensures superiority in the air and effectively strikes ground and above-water targets.

In 2008, a simulated air combat involving Su-35 and US fighters F-22, F/A-18 Super Hornet and F-35 was conducted at US Air Force in Hikam (Hawaii Islands). The result was disappointing: in 20 air battles against the Su-35, the Americans scored just one victory.

The unsurpassed maneuverability, electronic and weapon systems of the Su-35 make this fighter the best among other comparable Western analogues, such as the F-15 Eagle.