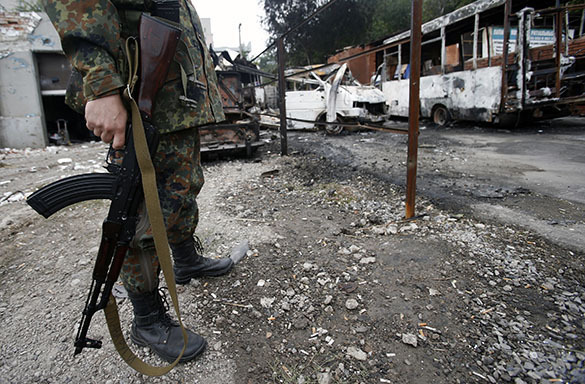 Moscow has obtained information about the Ukrainian military preparing another plan to solve the conflict in the southeast of the country militarily, Russian Foreign Minister Sergei Lavrov said.

"There is information, very alarming information, that we are now double-checking, that security forces are preparing for another stage of the military solution to the problem in the foreseeable future. This would be a disaster," Lavrov said at a press conference after the talks with his Latvian counterpart Edgars Rinkevich.

In addition, Lavrov said, Ukraine does not deny the fact of declaring mobilization. "There are different numbers, but from 50 to more than 200 thousand people need to be mobilized," he said.

According to Sergei Lavrov, Russia will continue demanding the West should put pressure on the "war party" in Kiev to exclude a military scenario in eastern Ukraine.

"We, regardless of what happens in Paris, Syria Libya and elsewhere, will continue to demand from our western partners, whose influence on the Ukrainian leadership is much stronger than anyone else's, that they look into those plans not to let the "war party" in Kiev bring down all those fragile hopes that the Minsk agreements created," Lavrov said.