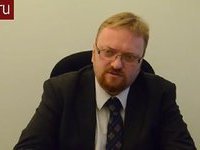 Vitaly Milonov, a notorious MP from St. Petersburg, was attacked today. However, the MP, who is known for his struggle against unconventional sexual relations remained unharmed.

"Yes, the young man tried to perform certain actions in my direction, but the flexible body was intercepted by hands of steel. We were three sturdy guys, and he was thin. He could punch him, but that would not be the right thing to do," Milonov said.

The young man was subsequently detained by police. A protocol of administrative offense was filed against the attacker under "disorderly conduct" article.