Vladimir Putin made a special statement about the crash of the Malaysian Boeing-777 in Ukraine. He noted that if the military operations had not been resumed in the region on June 28th, then the disaster would not have happened.   Putin reminded that Russia repeatedly "urged all warring parties to immediately stop the bloodshed and to sit down at the negotiating table." 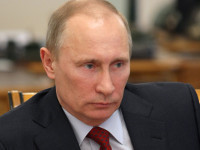 Putin called the crash a terrible tragedy, and stressed out that nobody had the right "to use it to achieve selfish political objectives," ITAR-TASS reports. Such events should unite, not divide people, the Russian president said. "All those responsible for the situation in the region should increase responsibility to their people and to the peoples of the countries, whose representatives have fallen victims of this disaster," he said.

The Russian President urged the conflicting parties to ensure full investigation of the disaster. One should ensure the safety of international experts, he said. "Today representatives of Donbass, Donetsk, representatives of the Emergencies Ministry of Ukraine, experts from Malaysia are already working there on the crash site, but this is not enough," said Putin. According to him, a "full-fledged team of experts under the auspices of ICAO, the international commission" should be working there.  Humanitarian corridors should be created accordingly for the team, said the Russian leader.

Putin assured that Russia would do everything in its power so that "the conflict in eastern Ukraine moves from today's military phase to the phase of discussions at the negotiating table, exclusively  through peaceful and diplomatic means."