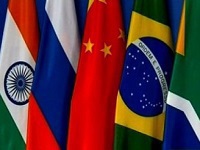 Russian presidential aide Yury Ushakov told reporters on July 10 that Russia intended to offer BRICS partners to create an energy association and the reserve bank of fuel. Russia will make the proposal at the BRICS summit, which will take place in Brazil on 15-16 July.

"Russia intends to propose a number of specific topics for consideration. Namely, we offer to establish an energy association of BRICS, to ensure energy security of the participating countries," said Ushakov prior to the start of Russian President Vladimir Putin's visit to Brazil.

The association will also conduct comprehensive research and analysis of trends on global hydrocarbon markets. As part of this association, according to Ushakov, it is planned to establish a reserve fuel bank and an institute of BRICS energy policy.

However, Ushakov added, details of the proposal have not been determined yet, Interfax reports.

As part of the visit to Brazil, Putin intents to take part in the closing ceremony of the FIFA World Cup 2014. During the ceremony, Brazil will hand over the rights to host the next world football championship to Russia.