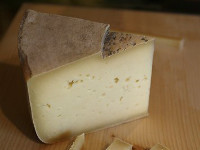 On April 30th, Russia's Federal Service for Consumer rights Protection (Rospotrebnadzor) banned the deliveries of Ukrainian cheese to Russia and the Crimea.

Chief Sanitary Doctor of Russia Anna Popova said that supplies from JSC Piryatinsky Cheese Factory to the Republic of Crimea and the federal city of Sevastopol were terminated as well.

According to Popova, JSC Piryatinsky Cheese Factory is the only Ukrainian factory that had been delivering cheese to the Crimea.