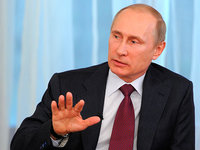 The escalation of the conflict in Ukraine puts the country on the brink of civil war, Russian President Vladimir Putin said in a conversation with German Chancellor Angela Merkel, the press service of the Kremlin said.

The telephone conversation between Putin and Merkel was initiated by the German side. The leaders  "exchanged views in connection with the unconstitutional course of the current taken Kiev authorities to violently suppress the popular protests in the south-eastern regions of Ukraine," the press service of the President said.

"The Russian president noted that the sharp escalation of the conflict in fact puts the country on the brink of civil war, - the report says. - He also recalled the importance of addressing issues of economic stabilization in Ukraine and ensuring the supply and transit of Russian natural gas to Europe."

The leaders of Russia and Germany expressed a hope that the talks in Geneva, scheduled to take place on April 17th, will be able to send a clear message to solve the situation in a peaceful way."