Russia to display new weapons on Victory Parade in Moscow 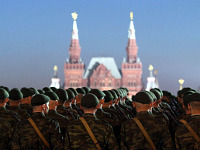 The press-service of the Russian Ministry of Defence in the face of Kirill Kiselyov said that new models of military equipment would be displayed during the Victory Day parade on Red Square in Moscow.

Thus, on May 9, one will be able to take a look at state-of-the-art anti-aircraft missile complexes Tor-M2U and anti-missile systems Chrysanthemum-C.

Tor-M2U has already been put into service in a number of military units. The system can destroy cruise missiles, air reconnaissance and electronic warfare equipment.

Chrysanthemum-C is capable of striking modern tanks of any level, as well as low-tonnage ships, hovercraft and low-flying air targets.