Democracy: 97% of Crimeans want to be part of Russia 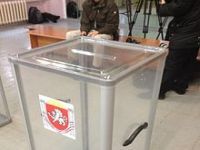 In the free and fair referendum conducted today in Crimea, exit polls show that around ninety-seven per cent of Crimea citizens wish to be part of the Russian Federation, against around seven per cent who wish to remain part of the Republic of Ukraine. Turnout: Around 85%.

The questions on the referendum were:

1.      To secede from Ukraine and join the Russian Federation

2.      To remain part of Ukraine and enjoy a greater degree of autonomy

The turnout was eighty-five per cent of the population of Crimea.

Next: The Russian Parliament will vote within the next month on the request of Crimea to join the Russian Federation.