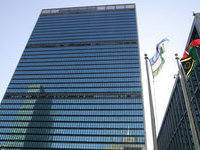 Ousted Viktor Yanukovych appealed to Vladimir Putin to use the Russian army to protect the Ukrainians and stabilize the situation in the country.

Vitaly Churkin, Russia's permanent representative at the UN Security Council, told of the letter from the President of Ukraine during an emergency meeting of the council. The politician explained that the letter was written on March 1 and demonstrated a photocopy of the letter to all members of the meeting.

"The lives, safety and rights of the people, especially in the south-east and in the Crimea, are in jeopardy. Under the influence of Western countries, terror and violence are on the rise. Therefore, I appeal to Russian President Vladimir Putin to use the Armed Forces of the Russian Federation to restore law, peace, order and stability of the country and protect the population of Ukraine," Yanukovych wrote in the letter.

On 1 March, the Federation Council authorized the Vladimir Putin to use the armed forces of the Russian Federation on the territory of Ukraine. Kremlin officials immediately said that the resolution did not mean that the president would use it immediately.