Russian President Vladimir Putin has become number one politician in the "World Ranking 2013." As many as 175 news agencies and news media took part in the work on the ranking. 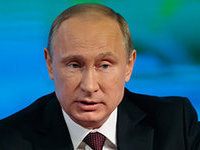 According to the agency, the survey was conducted with the participation of members of all existing international and regional associations of news agencies, including the European Alliance of News Agencies (EANA), the Organization of News Agencies in Asia and the Pacific (OANA), the Federation of Arab News Agencies (FANA) and the Association of National News Agencies of the Black Sea region (BSANNA).