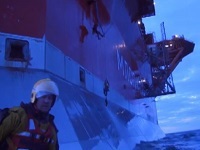 Greenpeace activists went on a boat ride on the Moskva River. The supporters of the group of environmentalists, who were detained on Prirazlomnaja drilling platform, held an action in the Russian capital. The "Greens" took a ride on boats on the Moskva River holding banners with slogans to release the prisoners.

Russia is not the first on the list of the countries, where activists organize various actions with a requirement to release their colleagues. Similar actions were held in the capitals of France, Britain, Germany, Mexico, Brazil and other countries.

The arrested environmentalists attempted to embark on the platform to prevent oil drilling works in the Arctic, but were stopped by FSB officers. Their act, if successful, could have led to environmental damage and even casualties.