Russian President Vladimir Putin may become the winner of the Nobel Peace Prize for his contribution to the settlement of the conflict in Syria. President of the Russian Foundation for Education, Sergei Komkov, sent a letter proposing Putin's candidacy to the Nobel Committee. 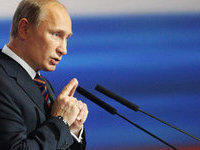 The letter emphasized that, Putin showed his commitment to peace in practice. "Being the leader of one of the leading countries of the world, he makes every effort to maintain peace and tranquility in his own state and actively contributes to the peaceful resolution of all conflicts arising on the planet," said the letter.

This week, the Russian President offered Barack Obama to cancel the military operation in Syria if Bashar Assad agreed to hand over chemical weapons under international control. Putin also wrote an article for The New York Times, in which he said that the U.S. strike on Syria would result in a surge of terrorism.

It is worthy of note that the Nobel Peace Prize is one of the most prestigious international prizes awarded for outstanding scientific research, revolutionary inventions, or major contributions to culture or society.