Russia proves use of chemical weapons by Syrian rebels

Russia has handed over evidence to the UN Security Council proving the repeated use of chemical weapons by Syrian rebels, chairman of the Duma Committee on International Affairs, Alexei Pushkov said Wednesday. According to him, both sides of the conflict in Syria own chemical weapons that should be outlawed. 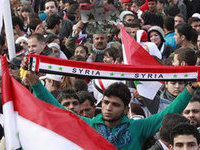 In addition, Pushkov said, the "war party" in the United States insists on military strikes similar to the Libyan operation, trying to disrupt the implementation of Russia's proposals for a peaceful settlement of the situation.

Previously, California-based website McClatchy said that in July Russia delivered a 100- page report to the UN that contained evidence of the use of chemical weapons in Aleppo in March 2013. UN spokesman Farhan Haq confirmed the receipt of the report, which has not been made public yet.