McClatchy website published information saying that Russia handed over a large 100-page report to the United Nations in July. The report supposedly proved that it was the Syrian rebels who used sarin gas in Aleppo in March. 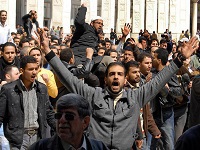 The announcement of this, according to the website, was published Wednesday on the website of the Russian Foreign Ministry. UN spokesman Farhan Haq confirmed the receipt of the report, which has not been made public yet.

On Friday, the Russian Foreign Ministry provided additional evidence to prove that chemical weapons were used by Islamist insurgents. The evidence referred to the report by Rusia al-Yaum channel. Correspondents of the channel talked to Mother Agnes Mariam el-Salib, who served in the monastery of St. James in Qara, Syria.

According to the woman, it is obvious that the information about the chemical attack had been distributed deliberately to give the West an excuse to invade Syria. In addition, the woman referred to incidents of torture and killings of women, children and elderly people. She was an eyewitness of those killings, and it was the Islamists, who committed those atrocities, she said.

Over the past two days, the media have published no less than four bodies evidence proving that the chemical weapons were used in Syria by rebels. The U.S. authorities that insist that it was the troops of Bashar Assad, who conducted the attack, have not exposed anything to prove their point.