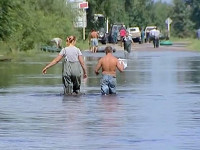 Mass evacuation will start in the city of Khabarovsk, in Russia's Far East, in case the water level in the Amur river rises to 780 centimeters.

According to mayor Alexander Sokolov it will be impossible not to evacuate the population of the city if the water rises to the above-mentioned level.

Currently, the water level in the Amur reached 688 centimeters. Should the water rise by one more meter, several vital municipal objects in urban lowlands will be flooded.

Evacuation has been launched in the villages of Krasnaya Rechka and Ussurisky on the outskirts of Khabarovsk. About a hundred people refused to leave their homes. In Khabarovsk, nearly 300 buildings have been flooded, including 14 apartment buildings. Almost ten kilometers of protective dikes have been built in the city to combat flooding.