Russian prosecutors have launched a preliminary inquiry into the death of a child in a city hospital in Yekaterinburg, officials said. 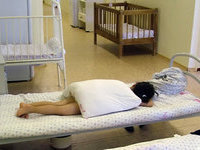 As reported, the child, diagnosed with meningitis, was hospitalized in the middle of July in serious condition. According to preliminary reports, the 7-year-old boy was complaining of severe headaches, which he had been suffering from July 11th.

The boy was admitted to the hospital in the town of Asbest, but his condition continued to deteriorate. The child was transferred to the intensive care unit. Afterwards, the boy was sent to the city hospital in Yekaterinburg, but medics failed to save his life. Investigation is underway.

Serous meningitis broke out in several regions of Russia, including Moscow. Outbreaks of the disease have been reported in Rostov, Yekaterinburg, Omsk, Moscow and several other regions of Russia. The patients' condition is estimated as relatively serious, but forecasts are mostly positive, medics say.