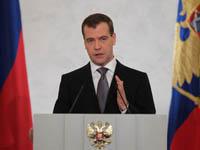 According to opinion polls, only 33 percent of Russians were able to name several famous people of Russia, who have their blogs. Dmitry Medvedev has become the leader in the poll. He was named by every fifth respondent. The second place was taken by President Vladimir Putin, although he does not have his page.

Previously, Medvedev denied rumors that said that it was not him personally, who was posting messages on his accounts. Medvedev has accounts on Twitter, VKontakte, Odnoklassniki, Facebook and Instagram.