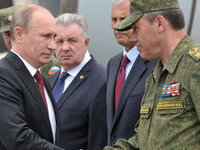 The president and the minister were observed the drills from a viewing platform and then flew above the area of ​​the training ground in a helicopter.

Large-scale drills to test the combat readiness of the troops of Eastern and Central Districts began following the order from the Supreme Commander-in-Chief on July 13. These drills are the largest in post-Soviet history.