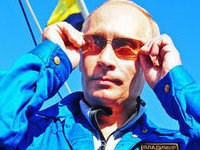 Experts say that it is most likely impossible to retrieve the sunken vessel, because she may fall apart during the procedure. Instead, it was decided to build a replica of the Oleg and use it as a museum for the items found on the sunken ship.

Putin's immersion took about 30 minutes. Afterwards, Putin told reporters that he had never experienced anything like this before. He also noted that the ship was staying "in a remarkably good condition."