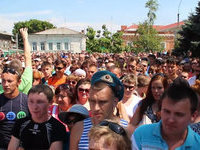 Residents of the town of Pugachev, in Russia's Saratov region, where mass riots took place yesterday, wanted to set ablaze Halal café located on the outskirts of the town.

The café is traditionally popular among natives of the North Caucasus. On Monday, July 8th, at about 23:00, a crowd of more than a hundred people tried to destroy it. OMON policemen were called to stop the riots.

Residents of Pugachev have been taking to the streets for several days already demanding the people from the Chechen Republic should be evicted from the town. The reason for the unrest was a fight, in which 20-year-old local resident Ruslan Marzhanov was killed.