One in every eight Russian is older than 65, a recent survey conducted by the Ministry of Labour and Social Protection said. 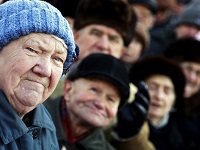 Deputy Minister for Labor and Social Security, Alexey Vovchenko, said that according to international criteria, the population of a country is considered old, if the proportion of people over 65 is more than 7 percent. In Russia, the percentage of those older than 65 is 13.

In other words, the number of residents of the retirement age exceeds those  under 16 by 9 million people.  The number of pensioners in Russia is 27.3 percent larger than the number of citizens of non-working age.

The number of people of retirement age has been increasing steadily since 2006 and made up 32.4 million people at the beginning of 2012, or 22.7 percent of the total population of Russia.